The Greek Pathway to Heaven 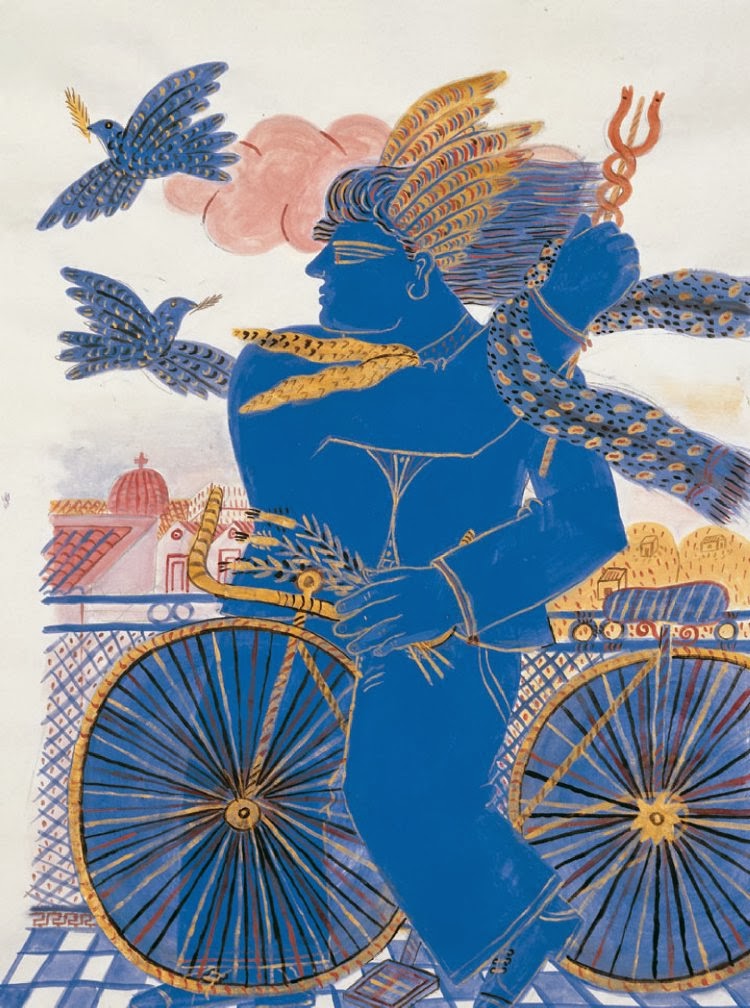 Alekos Fasianos, Hermes on the Bike

A daily report: It was still night when it happened, 7th November 2013. But such things always happen at night. Waking up at dawn, the information crashed us: They have invaded ERT, the public television headquarters, in Agia Paraskevi, Athens. It did not take us long, just a brief glance at the social media to realize what happened, and to rush there on the spot, in harmony with our Christian consciousness: “better too late, than not at all”.

According to St. John Chrysostom’s Paschal sermon,[1] read during the Eastern evening Holy Liturgy, the master of the Kingdom of God “is generous and accepts the last even as the first.” In this extended interpretation on the parable of the workers in the vineyard (Mt 20: 1-16), not only does John Chrysostom keep alive the hope of all people, but he also claims:

“Enter then, all of you, into the joy of our Lord.
First and last, receive alike your reward.
Rich and poor, dance together.
You who fasted and you who have not fasted, rejoice together.
The table is fully laden: let all enjoy it.
The calf is fatted: let none go away hungry.

Let none lament his poverty;
for the universal Kingdom is revealed.
Let none bewail his transgressions;
for the light of forgiveness has risen from the tomb.
Let none fear death;
for death of the Savior has set us free”.
Far from this idea of the heavenly Kingdom, injustice, poverty, isolation, marginalization, death, is what we experience in daily life. Especially in the current era of the Memorandum, the years of endless austerity, more than ever before do we lead our lives in the rhythm of the trumpets of hell, the spiral of death.
What is the narrow path leading to the Kingdom of Heaven? How do we serve and try to apply the second petition of the Lord’s prayer? How do we experience the Liturgy after Liturgy?

The question is of existential importance nowadays, to us all. The answers differ, to a certain extent. Yet, social and political questions become vital, assuming as they do nowadays a life and death nature, in as far as public life delimits the human person to hitherto unheard of degree.
Greek society is experiencing an extreme deterioration of life conditions, inclusive of which are violent impoverishment, disrespect for private property, destruction of public infrastructure, a governmental disregard for the law and the function of democracy, all in a way that is usually unknown in peaceful times. But are our times peaceful, or is it just a myth? The victims of the austerity policies, i.e. the unemployed, the homeless, the sick, the elderly, and handicapped would not be able to tell the difference. The number of suicides has doubled and is currently the highest in Europe. The reduction of our GDP to 25% since 2008, the reduction of disposable income by 40%, can not be compared to those of peaceful times, but to that of a period of war. Political and economical analysts point out the structural problems of the EU, the fact that one’s surplus is the other’s deficit, the clasp between centre and periphery, north and south, the lack of democracy within European structures, the withdrawal of politics on the heels of the advance of the markets and capital. The problem of unworthiness and corruption of our own politicians is very closely linked to forms of dependence, from whence power de facto derives.
In addition to structural problems, Greek society must face the rhetorical tactics of the Troika and EU officials, with their reference to the uniqueness of the Greek case and the respective uniqueness of the punishment we need to undergo, in order to cease being “naughty and lazy”, “counterproductive,” and so on. All this verbal derogation coming from sweep stereotypes and a deeply racist mentality, intended as they are to justify austerity measures and constant supervision until the debt is reduced to 75% of the GDP, is alarming in Greece. In this “experiment” land, however, as this country has been since the Troika’s arrival and intervention, the debt is escalating in reverse proportion to the reduction of the GDP, the so called (euphemistically speaking) “internal deflation” -- a situation that simply cannot be regulated or even smoothed by monetary and fiscal policies, outside the context of an independent currency. The external debt stood at the alarming level of 125% in 2008, and after the implementation of all these policies, including a huge PSI haircut, it is estimated to reach 175% by the end of 2013. The production structure and the infrastructure of the country are rapidly destroyed. It is being often pointed out, by independent sources, that the catastrophe is unique, even when compared to previous IMF intervention paradigms, anywhere in the world. These worries of experts in finances are being shared by the people, at a cognitive and an experiential level. The Greek people would be willing to make sacrifices, face sparseness and increase efforts, if these amounted to some solid hope for them and their country. The case not being such, but rather a one-way path leading to a long, torturing and asphyxiating dead-end, it is creating defensiveness and atavistic worries, combining historical experiences with present attitudes, simplifying it to the dangerous idea of “repetition of history”.

The Church, as the Body of Christ

The touch of faith is needed more than ever to the people, not only to strengthen and inspire, not only as a means for them to endure and transform suffering into freedom, but also in order to create bonds of love and unity within society. It is the trust in God that will allow people not to despair, but to resist in a loving and bond-creating way. It is love of God that will help overcome fear, prioritize reason over irrational instinctive reaction, over the temptation to do injustice to the even weaker, and seek an individualistic salvation; for in contrast to these, the Christian view, our dream and our striving lever, is the kingdom of God. Moreover, it is the universal character of the faith in Christ, that will allow us to combat social segmentation and automatism by thinking of all people as one body, the body of Christ. The love for our enemies can really be experienced as an empowering way to deal with one’s enemies, not by submission or self-destruction, but by reaching out to them, by overcoming a dangerous defensiveness with a creative openness.
Political terms like “solidarity”, gain their full conceptual depth as understood by faith. And faith cannot remain on the level of individual theoretical contemplation, since it obtains its full meaning when incarnating in the Church, in the ecclesia, an ancient Greek word denoting the fundamental collective function of democracy. Having been “western” for many years, having experienced the individualism, isolation and solitude of western postmodern societies, we are learning again to understand the need for communion, for receiving communion with the blood and body of resurrected Christ.

The Administration of the Church

The Administration of the Church of Greece is being faced with a multitude of challenges. Part of them has to do with the protection of church property from plundering under lawful pretexts and ostensible legitimacy, as is the case with all property, public and private, in these days. It has to cope with the inability to appoint new priests, unless they are willing to work on a voluntary basis. It has to comfort and meet with the real needs of the people. The Church is organizing social networks, giving out 80.000-100.000 portions of food on a daily basis through parish or metropolitan community soup kitchens. Had it not been for this Church activity, we would have had thousands of deaths on starvation. The Church is taking care of handicapped people, drug addicts and victims of domestic violence (mostly women), and is even creating medical centers for the poor, in all substituting a welfare state in many regards. If it hadn’t been for that activity, Greek society would have exploded much earlier, but it is still difficult to foresee what may yet happen.
And here come the questions and doubts as to the character of philanthropy as an aspirin, where the remedy of this cancer is of a political and social nature. Yet, the Church has done more than charity to criticize the system and the applied policies: it has been vocal via decisions of the Holy Synod,[2] and public statements such as the strict public letter of Archbishop Hieronymos to the ex Prime minister Loucas Papadimos[3] concerning the true predatory and unjust nature of the PCI, and many many pleads and sermons preached by individual metropolitans. However, the media cartel, on the one hand, and the sense of a distinction in roles, which creates hesitation and self-censorship, along with the structural and administrative interdependence with the State, on the other, do not allow the Church as administration to speak up, or its voice to be heard more clearly. So is also the case with the major combat against racism, and the extreme right wing Nazi party. The Church has pointed out the absolute conflict between such ideas and practices and the Christian gospel, but seems somehow hesitant or unwilling to condemn officially and synodically the ideas that create this form of criminal violence, or enter into radical war with the supporters of this monstrosity. We, as Christians, are called to fulfill our duties on the grassroots level.

Greece, becoming as it does more and more like Latin America, experiencing impoverishment, injustice, a dramatic widening of the social gap between the rich and the poor in what had been a more unified society, the destruction of the middle class, authoritarianism and totalitarianism to the point of complete fall of democracy, murderous racial violence, violence arising from the state and oppression in order to pass inhuman measures against its own people, misinformation and psychological war, the termination of public TV – a coup d’ état in the stricter sense -- depression in both psychological and financial terms, taxation and administration of a colonial nature, crime and lawlessness, must now explore and experience the liberating nature of faith, the truthfulness to the gospel as evangelion. Furthermore, the rediscovery of the Greek patristic tradition and theology, that criticizes wealth based on usury and monetary investments (financial bubbles not yet being known in their times), gives us ways, tools and wisdom to understand faith as love to one’s brethren and as an inspiration to freedom and justice. 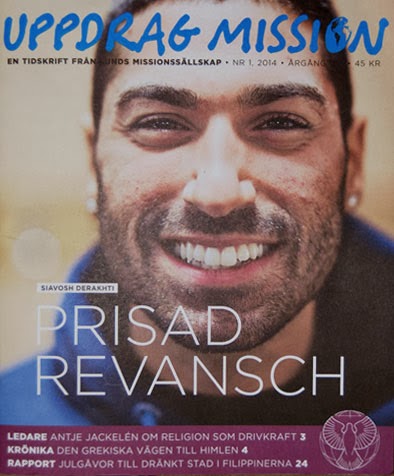 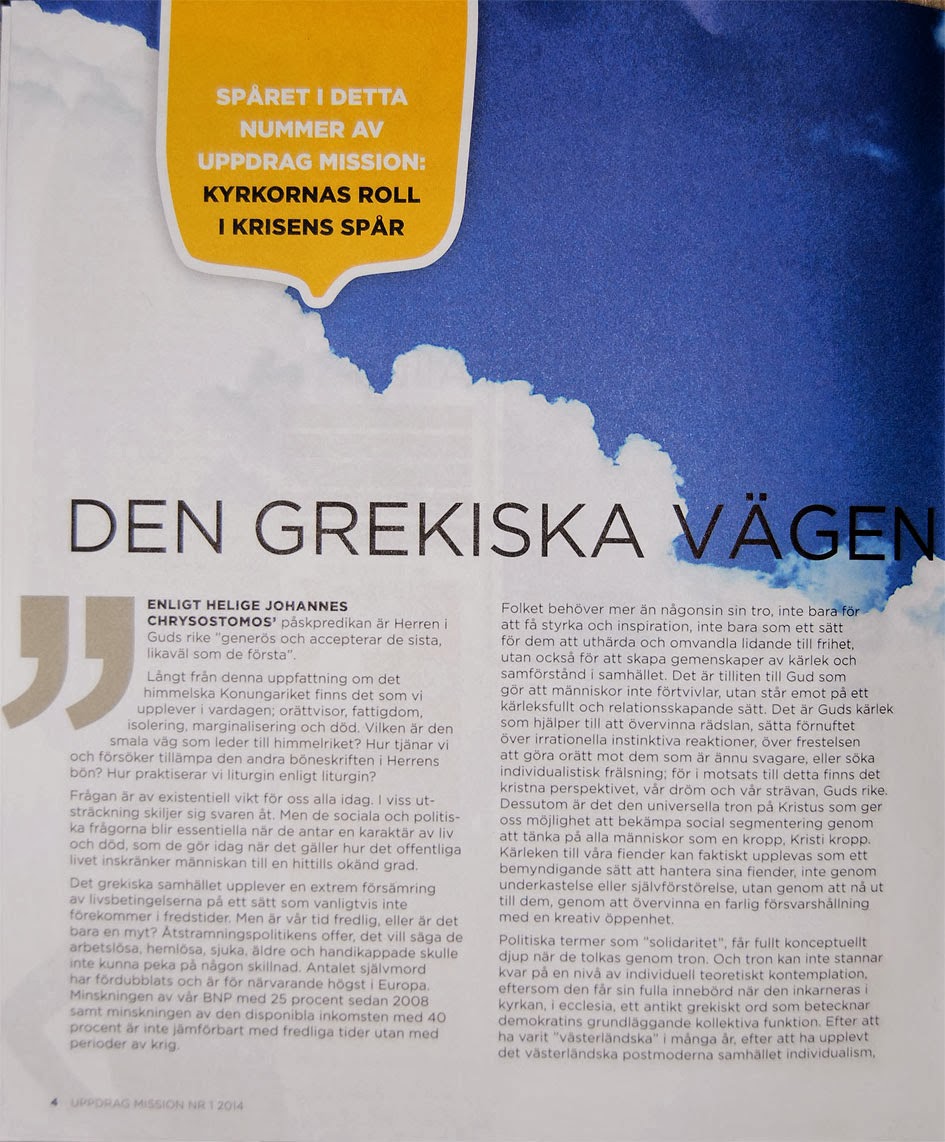 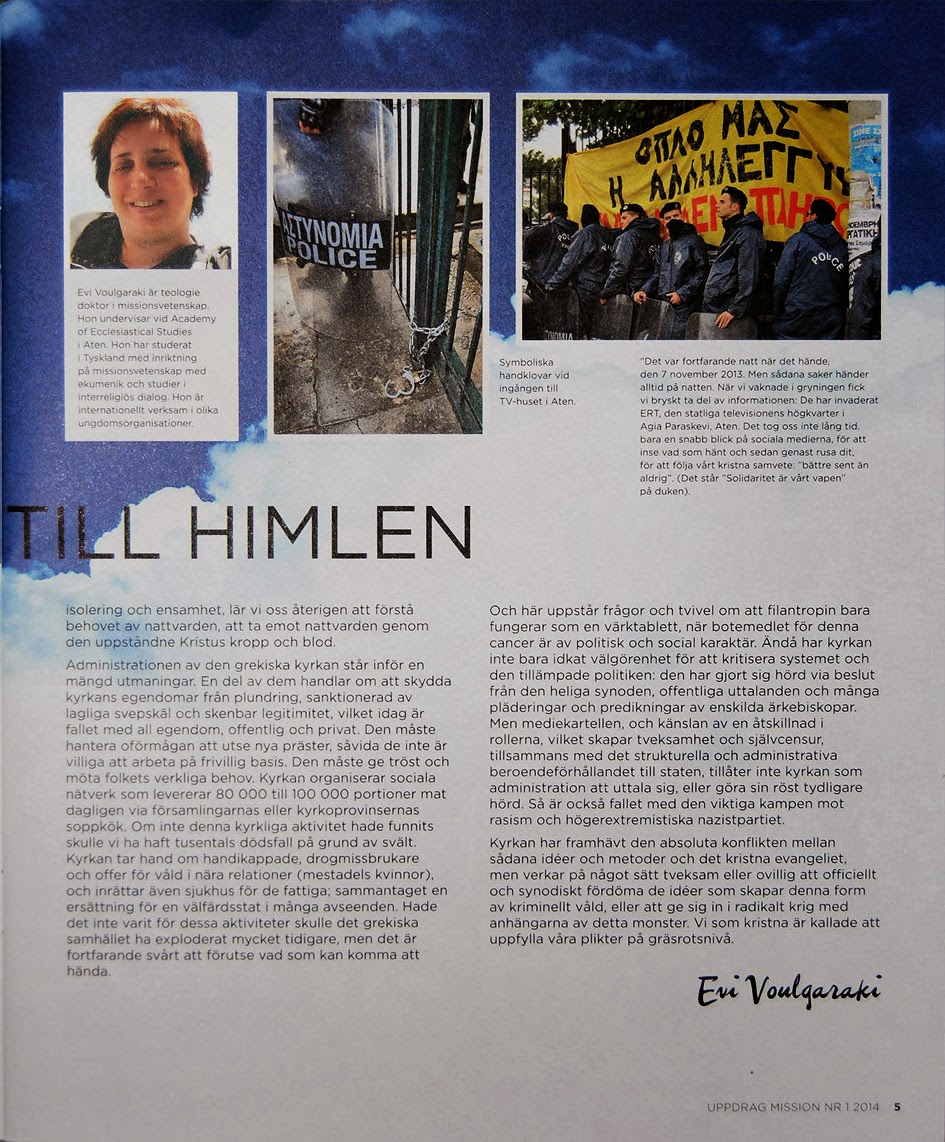